Not even a week after Banjerpickin landed a rover on Smoon, two other people have managed to land a rover on Smars. This flies in the face of what many people thought was possible, including the programmer for SimpleRockets, Andrew Garrison. A week before the Smartian landing, Andrew was quoted saying this:

Sure, I know I was wrong that it is impossible to orbit Smenus, but getting a rover to Smars is just not possible. Anyone who tries to do so is a fool!

I imagine Andrew feels a bit like this, now that two people have landed a rover on Smars. The first rover was landed by RogueSteward, who put together an album of photos documenting and explaining his technique. RMIT’ing is now a common technique and can be found in nearly any textbook that covers inter-planetray travel in the Smolar System. 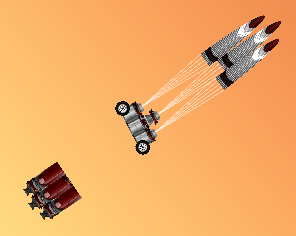 One day after RogueSteward managed to do the impossible, Null_Pointer accomplished the same feat. The mission was nearly aborted due to a malfunction during lift off, but management directed the mission to proceed. One manager had this to say about the situtation:

It is possible that everyone will die now, but since we are recording this mission for YouTube, it’s a risk we are willing to take.

Fortunately no other disastrous events occurred and the mission went smoothly after that and Null_Pointer piloted the ship into the Smartian SOI like a rocket surgeon. You can watch a video of the mission here: